The German economy has long occupied a leading position. The post-war ‘Wirtschaftwunder’ elevated an economy devastated by war to become ‘The Powerhouse of Europe. Bordering 9 countries and two important seas – perfect for trade – Germany has grown to become the 4th largest economy in the world.

However, despite its success, and even before COVID-19 razed much of the global economy, the German economic engine has been exhibiting signs of rust. A slowdown in international trade, the failure of German car manufacturers to prepare for electrification and a lack of presence in newer technologies exposed vital sectors of the German economy to some strong headwinds.

That said, recently released data shows business activity recovering faster in Germany than in its near neighbours. As a result, negative commentary about Germany’s reliance on global manufactured goods trade is now waning. Commentators are once again pointing to a ‘two-speed’ European economy, with Germany once again leading. Germany’s relative strength could have potential consequences for the cohesion of the Eurozone.

How has this come about? The graph below represents the Composite Purchasing Managers Index (PMI) for the Eurozone. In common with other advanced economies, we can see how the economic output of the Euro Area collapsed as COVID-19 reached European shores. The Euro Area PMI recorded its lowest ever index reading of just 13.6 in April. Remember, a reading of 50 and above implies expansion. Therefore, a reading this low is massively below trend.

We can also see from the chart that during the summer, the Euro Area regained positive momentum, which has tailed off slightly because of a contraction in the PMI level for services industries. Services data accounts for around two-thirds of total economic output; thus, it isn’t surprising to see a drop in the composite measure (which is based on manufacturing and services). 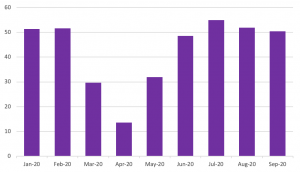 To understand the present economic dynamics within Europe, we need to assess data presented by the constituent countries of the Euro Area. In Graph 2 below, we show a snapshot of the four largest Euro Area economies; France, Germany, Italy and Spain. 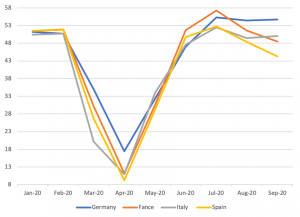 A quick glance at the chart allows us to draw three immediate conclusions:

Why is Germany’s economy faring better than its neighbours?

In Q2, the lockdown enforced by the German government was much less strict than those implemented in neighbouring countries. According to the German Council of Economic Experts, the comparably lax restrictions allowed significant parts of the German economy to maintain operations.

Meanwhile, after years of budget frugality, the German government had much greater latitude to provide generous fiscal support to businesses and households than some of its neighbours. Back in March, the German Finance Ministry unleashed almost €1 trillion in economic aid. The higher debt burdens of other Euro Area economies, and the fiscal rules governing the Euro, meant they could not match largesse of the German government. Crucially, many businesses retained workers thanks to the Kurzarbeit employment support scheme.

It is too soon to make any meaningful projections but what is clearly mapped out is German industry responsiveness to overseas demand. Reflation in key German export markets will naturally boost demand-led growth, putting further distance between Germany and other Euro Area economies.

If the trend of relative German outperformance continues into 2021 weaker economies across the Euro area will question whether the agreed €750 billion Post Pandemic Recovery Fund is sufficient.

As a reminder, the €750 billion package was announced after months of rancorous negotiation. The objective of the fund was to alleviate the pressure on southern European economies with large debt piles by creating a form of shared European debt.

One possibility is that calls for increased aid on offer will resurface to sit alongside familiar sticking points between the fiscally conservative northern European states and their spendthrift, southern neighbours.

However, striking a more optimistic note, it is also possible other economies will benefit from any German reacceleration in growth because of the tightly linked nature of Europe’s cross-border supply chains.

Should this occur, demand will be raised more generally, albeit with Germany once again fulfilling its role as the engine of the European economy.

One thing seems clear, growth that benefits all is the only true vaccine against disharmony, and in this regard, Germany must exercise its responsibilities to a broader Europe carefully.