Home Our Blog Road to Recovery; US Consumer Spending Review
Share this page

Last week we examined how increased US consumer appetites were affecting trans-Pacific trade, inflating shipping costs from China to the US, and leaving US agricultural producers without any means of exporting their produce.

We deduced from that evidence that the rising costs for shipping goods from China to the US and ships returning empty to fill up faster were reflective of robust US consumer demand ahead of the festive season. Recently released figures point to evidence that US households are continuing to spend and are not being put off by a lack of political progress on further fiscal stimulus.

We analyse the latest consumer data, place the figures in context, and explore the potential risks to demand in the world’s largest economy.

Eight months on from the first lockdowns we can see with hindsight the economic effects of COVID -19: Demand destruction was rife, households’ ability to spend was severely curtailed, and whole economies were placed in a state of suspended animation as governments desperately attempted to contain the virus’ spread.

Graph 1 below reflects those dynamics, by displaying the precipitous fall in US consumer spending, as represented by the purple line, in dollar terms. The drop was so severe during March and April that US consumer spending regressed to levels seen 5 year previously. Dropping to just over $12 trillion from $14.88 trillion in February.

Equally evident, is the steep rebound during the third quarter of the year, when economies reopened, albeit with social distancing enforced. Ultimately by October, the latest figures available, US consumer spending had recovered to around $14.64 trillion, meaning expenditure was only 2% below its pre-pandemic level.

The green line of graph 1 gives us some clue as to the cause of the bounce-back. Unlike other economic contractions, income levels in the US rocketed skywards helped by Federal and state governments providing generous financial support. The stimulus packages helped preserve the purchasing power of families and businesses that were forced to cease economic activity.

We can see below how total personal income levels responded, rising to $21 trillion in April, an increase of over 12 percent in just one month. As shutdowns were lifted, income levels fell but consumer spending kept on rising. This shows the programmes largely fulfilled their objective of preserving demand over two-thirds of the US economy. The recent fall in incomes is a worry but countered by pent up demand financed by falls in savings. This shows why a further fiscal package is as a bridge to vaccine relief and economic unlocking. 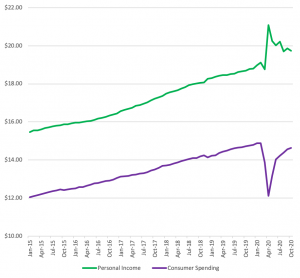 The review above points to the resilience of the US consumer in the face of the most severe economic crisis in generations. Likewise, US economic momentum did not remain withered, refuting the worst fears of some commentators and policymakers. Moreover, the recent news around vaccines have offered a glimmer of hope that a ‘normal’ environment could resume at some point in 2021.

Between now and then risks remain. Some metrics indicate the astonishing momentum of the US economy is beginning to slow slightly. For instance, according to the US Commerce Department, weekly applications for jobless benefits recorded their first consecutive weekly increase since the summer, increasing to 778,000.

While the news is disappointing it is important to place those figures in context. Graph 2 shows the new weekly unemployment benefit claims since the beginning of March. Looking back towards the beginning of 2020, you can appreciate the severe pressure placed on the economy by COVID shutdowns.  Weekly claims rocketed to 7 million by the end of March, up from 210,000 new claimants during the first week of the month. 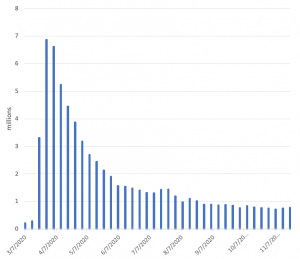 So, while the recent increase is somewhat discouraging, the position is much less arduous than faced in March. Additionally, with COVID cases rising in many cities, it is unsurprising that local politicians have resorted to lockdowns in the first instance.

Overall, US economic growth is expected to continue throughout the fourth quarter, albeit a slower rate than the third quarter at around 5.7% annualised.

The US economy faces short-term challenges and bumps in its recovery, but the vaccine is a game-changer.

Everyone’s worst fears anticipated back in March are fading. In fact, the Organisation of Economic Cooperation and Development released their latest forecasts for the global economy  anticipating a strong speedy rebound of 4% growth globally in 2021.

Finally, monetary policymakers will remain supportive, laying the foundations for a sustainable period of growth. They are making it very clear that tightening of financial conditions is way into the distance.