The UK has performed better than anyone could have imagined in respect of Covid vaccination with 55% of the population having received their first dose. The graph below illustrates the relative strength of the UK’s vaccination rollout. Next, we will show just how important this is for the jobs market

Chart 1: Share of people who have received at least one dose of COVID-19 vaccine 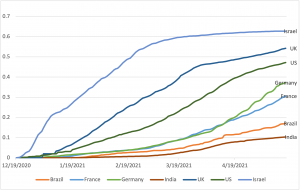 Boris Johnson last week in his written introduction to the Queen’s speech promised to tackle inequality and “level up” the country. He said that we must use the pandemic recovery so that “jabs, jabs, jabs become jobs, jobs, jobs”. He sent a clear message to the public that the incredible vaccination rates must transmit to higher employment levels.

Chart 2 below shows the unemployment rate and how it has evolved in the UK during the COVID-19 pandemic. 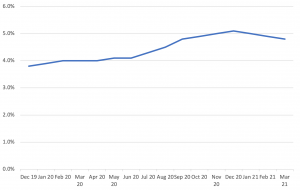 The chart demonstrates that unemployment is not nearly as bad as feared. Before the pandemic hit unemployment was just under 4% and the latest figure is 4.8%, only slightly higher. And as we will see later in Chart 3 this level is good relative to history.

Thankfully, we now know that the Office for Budget Responsibility forecast of unemployment at 10% and the Bank of England forecast of 9%, made last Spring during the first lockdown, both turned out to be wrong. Yes, the unemployment rate did tick up quite sharply, but it peaked at 5.1% not 10%.

Moreover, despite another lockdown unemployment has fallen back, reaffirming the benefits of the protection offered by the furlough scheme. This scheme has bought time to allow the next phase of unlocking to unfold but this time boosted by a UK wide world class vaccination programme.

Before we start looking ahead, as mentioned earlier, it is worth looking at unemployment relative to history. This adds context to the conditions we are all experiencing today. In Chart 3 below we can see the unemployment level here in the UK remains low compared to the average over the last fifty years. 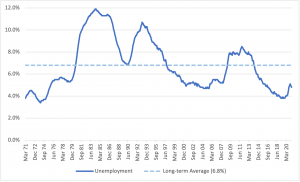 One of the aims we hear about from policymakers is the desire to attain full employment. In the US, the Federal Reserve Bank have a policy goal of ‘maximum employment’. This is the highest level of employment the US economy can sustain while maintaining a stable inflation rate.

In the UK we think of full employment as an ideal outcome; the point where no one is involuntarily unemployed. In practice the level of employment is fluid and impacted by many variables. Also, different governments have different goals. David Cameron used the definition of wanting to have the highest percentage of people in work of any developed nation.

As the unemployment data rolls forward, it will start to evidence the end of the furlough programme. A situation causing angst among policymakers. However, with vaccinations widespread we believe the unemployment picture presented today will not suddenly deteriorate. Here are some additional data points beyond the headline employment statistics that support our opinion:

We do not take issue with the notion that challenges lie ahead, particularly in relation to economic scarring (permanent damage after an economic shock). But we think the fears are overdone.

Yes, scarring is a key unknown, but thanks to the vaccination programme hopes are rising that this will be limited in scope. Meantime, skills shortages are appearing in sectors where demand shifts are evident. For example, with foreign holidays looking less likely again this year households are spending more than normal on house renovations, thereby increasing demand for joiners and plumbers. People are also going on staycations boosting local suppliers.

Such shifts in the jobs market often lead to workers being displaced in one sector but being sought out in another sector. When this happens the mainstream media always focus on job losses and not job creation, because losses grab more attention.

Finally, there is no doubting the fact that strong employment levels are vitally important to the UK’s economic recovery. High levels of employment allow more people to spend money. This in turn leads to more money circulated to businesses. Most economic recoveries are spurred by employment creation driving increased consumer spending. The UK is a service focussed economy, as is most of the developed world, so stronger employment prospects will lead to a strong economy.

The UK labour market remains on course to come through the COVID-19 pandemic remarkably unscathed.

A speedy vaccination programme means that workers can go back to work with confidence and employers can hire workers confident of the recovery.

Both bode well for the UK economy.

* Report on Jobs: Recruitment activity rebounds at near-record rates in April as easing of lockdown boosts market confidence :: The REC